This year’s BlogHer conference in New York City was nothing short of amazing. I had the most awesome time learning, partying, bonding, sharing, and even debating with some of my friends, fellow bloggers, and counterparts. I attend a lot of conferences, but there is nothing like BlogHer. I am most excited about putting all the ideas and knowledge I learned at the conference to use on my own blog and projects.

And while I know everyone and their mother is posting their BlogHer recaps, I thought I would share with you my 5 Most Fabulous BlogHer ’12 Moments. These are priceless items that I will remember for years and years to come.

The purpose of attending BlogHer is to network, not just with people you know, but those that you don’t know. At the end of the closing session, I mentioned to my roomie @DanielleJMe that I wanted to go to a greasy spoon. One of the ladies sitting at the table named Dorothy chimed in and asked if she could go with us. And voila, a friendship was born! We chatted and walked to Lindy’s, a nice tourist trap of a greasy spoon next to our hotel in midtown and noshed and fellowshipped about our conference experience. And later on in the evening, Dorothy joined me and my friends at a party where we danced and hung out. I think this is the beginning of a fabulous friendship!

2. Seeing My Old Ones

While on the conference circuit, I meet a lot of people. Some I see more than others. But during BlogHer (since it’s the Mack Daddy of blogging conferences), I got to see my old friends who I haven’t seen in some time. One of those people is Laurita Calderon, who is a Latina blogger who blogs about her life with Spina Bifida. I met Laurita at SheCon last year in Miami, and haven’t seen her in over a year. She is a great woman with an incredible story, and I am always honored to be in her presence. 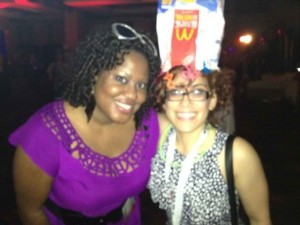 I have always loved Katie Couric, but I think she became my girl crush during her chat with BlogHer co-founder during BlogHer’s lunch keynote. Katie was so honest and open, and really made my day with her words of positivity. Katie’s new daytime talk show debuts in September. I will be bringing more information about it on this site soon! 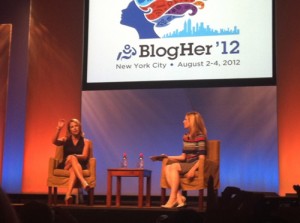 BlogHer ’12 kicked off with an appearance from President Barack Obama. While BlogHer reached out to both candidates to see if they were interesting in addressing its attendees, Obama was the only guy that took them up on it. Because he was on the campaign trail attending a nearby fundraiser, he was not there in person, but addressed is via video. It was indeed a treat and I appreciated that he took time out of his schedule because he understood our voices are important. 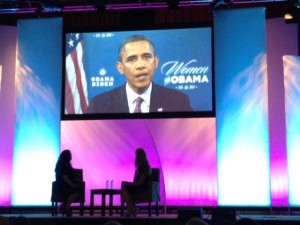 BlogHer isn’t just for sessions and workshops. Their parties are a pretty big deal. From Sparklecorn to CheeseburgHer, there’s a little something for everyone. And while what happens at BlogHer parties stays on Twitter, Facebook, et al, this photo that was taken at the latter party really personifies everything BlogHer is about. I love this photo of me, Robin from Balls to the Wall Ya’ll, and Kesha from UncommonChick. 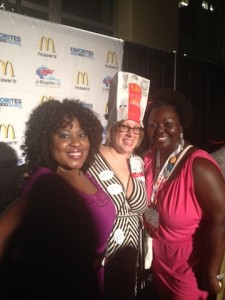 Next year’s BlogHer will take place in Chicago July 25th through 27th.  I will be here. Hopefully you will be too!