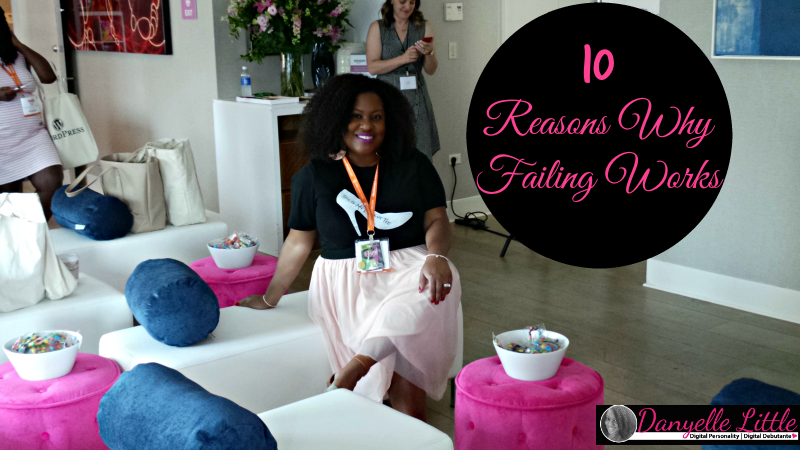 At any given time, you can search the web and read hundreds of thousands articles and stories about entrepreneurs and careerists who are sharing their success secrets. What we as the end user sees is often the glossy part of their story. The red carpets, the adoration, the riches, the vacations—I could go on and on. But what we don’t see is the not so good days that they had to get to where they are today. The rejections, the slammed doors in their faces, the chase. One thing most of these stories have in common as that at one time or another, they failed. And it was in that failure that they learned and the took it and flipped it.

Failing is the physical result of trying out your ideas. And it also can act as a blueprint to help propel you to heights you’ve only dreamt of.

Are you with me?

Here’s a list of 10 reasons why failing works. And why failing is important for reaching your ultimate potential and greatness.

Failure is evidence that you tried

Case in point, someone can snicker at you for failing, but what they can’t do is talk about you like a wimp. See, at least you tried. At least you had the guts enough to go for it, even if it didn’t work out this time. You still can rock a badge of honor that says “Honey, I went for it. Did you?”. And that, is a winning attitude to have. You take your L like a boss, and move on.

Failure helps prepare you for success

Oftentimes, when people have success straight out of the box without experiencing failure, they are unprepared. Preparation is key to long-term success and stability. So use your failure to help you have a level-head when you do win.

Failure can help you teach others

I’m all about teachable moments, and failure can do just that. By allowing others to see us fail (and openly share our stories), then we can teach others to avoid our mistakes. It is a really good way of paying it forward.

When you lose, it’s an opportunity to help fuel you to win next time.

You’re only as good as your last failure or win. Failing isn’t meant to be static. Make it move and continue on to bettering yourself, your strategies, and your implementation. The failure is setting you up to win.

Steve Jobs co-founded Apple, rose it to great heights, and then was ousted by his own board because he was feeling himself too much. He took that L and came back a few years later, and took the company that he started back from virtual obscurity to being one of the most successful brands of our day and age. And he helped cultivated a legion of loyalists who will pay more for his product because he made it into a lifestyle. Loser turned winner—-you can do that too!

But is it really failure?

Speaking of Steve Jobs, was his loss a real failure? Or a pathway to one of the greatest comebacks of all time? This could be you but you are playin’…

Failure can be monetized

As I stated before about failure being a teachable moment—you can get paid by sharing your story and telling people what NOT to do. So is that really a fail? Perhaps. But one that can make you money.

So you lost one. But you can also birth one in the process. It’s all how you look at it.

Failure is better than not trying at all

And in the words of Forest Gump, “That’s all I got to say ’bout that…”

Failing works of you make it a learning experience and one to grow from. Here’s a toast to all of the forward-thinkers, and dreamers, and visionaries, and innovators, and…failures. Your turn is coming up. And I see you.

Let me help you achieve the greatness you’ve been destined for. Visit my Hire Me page and get the tea on what services I offer, and how we can win together. I am booking hour long coaching sessions currently, but space is filling up, so get me while the getting is good.